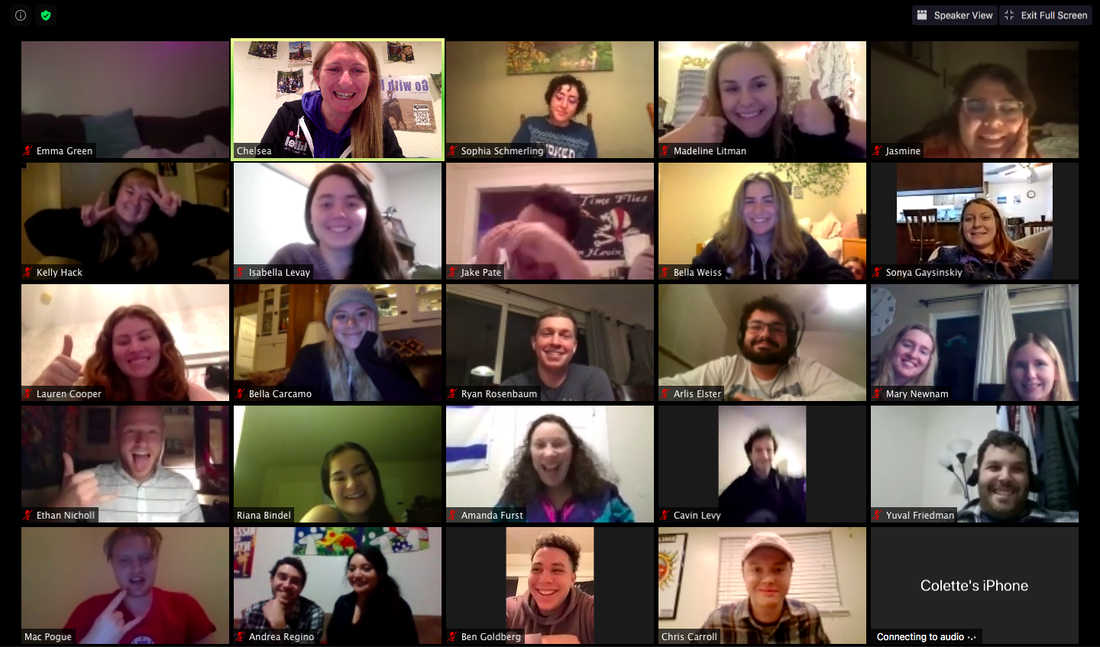 Amanda is a graduating senior at Chico State majoring in Liberal Studies and minoring in Child Development. Amanda is really passionate about working with kids and loves supporting people in any way possible. In her free time, she loves to read, watch Greys Anatomy, hike and be outside. Her family is from the central coast of California also know as Santa Maria.


Amanda has been at Chico State since Fall 2018. She has been involved in many different things on campus. She is currently a member of Alpha Omicron Pi and served as VP of Administration and Philanthropy Chair, as well as volunteering for CAVE. Amanda got involved in Hillel when she pitched an idea of bringing back upper classman because she was looking for a place she could connect with others with the same values.
Yuval is a senior at Chico State, majoring in psychology and child development, with a focus on childhood education. In his free time, he likes hiking in forests, swimming, listening to music, watching movies, and hanging out with his friends. Originally from Israel, he moved with his family to southern California for a large part of his life. After completing a mandatory service in the Israeli Navy,

​Yuval moved back to Los Angeles to study at Santa Monica College, during which he earned an Associate’s degree and transferred to Chico State in the fall 2018 semester. Yuval moved to Chico to escape the “big city”, and he loves Chico’s nature and “small, college town vibe”. Yuval has experienced a bit of both worlds, living in Israel and the United States; he feels he can be of service to the small Jewish community in Chico as a team leader, and wants to bring as many Jewish students to Hillel. Yuval is also the head of the Jewish identity committee in Alpha Epsilon Pi. ​​​
Bella is a sophomore at Chico State majoring in Psychology. She is originally from Danville, California and loves living in Chico. Bella has enjoyed exploring and finding new places around the town and in nature. Because of her active involvement with Hillel as a freshman, Bella is beyond excited to be on the other side of things and to help continue Hillel to grow into the amazing community that it provides.

Bella loves Hillel because it gives her opportunities to meet new people and a Jewish home away from home on campus.
Emma is a junior from Encinitas, California, majoring in Management Information Systems with a minor in Marketing. Emma likes to explore the town of Chico with friends, hike around Bidwell Park, and loves to find the humor in every situation. She is passionate about creating an inclusive and engaging community on campus, and loves event planning. Emma has been involved in many social action programs and is an active member of Alpha Delta Pi sorority at Chico State.
​
Emma is excited to be on the other end of Chico Hillel, and be able to give back the incredible experience with Hillel that she was given as an involved freshman. Chico Hillel is especially important to Emma because she served on the board of her high school youth group, where she discovered her love of leadership and drive to promote unity in the world. Emma cherishes the relationships she has made through Hillel and is excited to bring her warm and creative personality to the team this year.
Jaquelin is a junior at Chico State University, majoring in Public Health. Jaquelin is from San Diego, CA. In her free time Jaquelin enjoys spending time with her family, and friends. Some of her hobbies include painting, biking, and hiking.

Jaquelin appreciates the warm community Hillel has brought her. She looks forward to welcoming new students, and helping them get involved with Hillel.
Stephen is a junior at Chico State, majoring in journalism (PR) with a minor in comparative religion. Stephen enjoys river days, dancing in public, and is enthusiastic about growing organizations he cares deeply about. He is ambitious when it comes to meeting with and connecting new people and strives to make everyone feel at home. Stephen is an active member and the Vice President of the Alpha Epsilon Pi fraternity.

Stephen is thrilled to be working with Hillel and growing the culture and safe place that it provides. The value of having a home away from home is immense and he wants to do everything in his power to help foster a welcoming environment for the returning students and incoming freshmen this year!
Riana is a sophomore at Chico State University, majoring in Hospitality Management and minoring in Tourism. She was born and raised in South Lake Tahoe and is a part of the Chico State band when the class is in person. She moved to Chico to gain greater experiences since she is from a "small town vibe."

​Riana is also a Residential Advisor, which means she is a trained peer leader who helps incoming freshmen to settle into the dorms and in the area. Riana is excited to be a part of the Chico Hillel so she can help freshmen and others find a place in the Hillel and Chico State community. ​
Mac is a senior at Chico State, majoring in visual arts.  He is a volunteered manager of the Chico State division two basketball team and a brother of the Alpha Epsilon Pi Fraternity on campus.  Originally from Los Angeles CA, he has been in Chico for two years. When he is not busy with school or his extracurriculars Mac loves to cook, play/watch basketball, and participating in AEPi events. As VP of Nutrition and Cultural Foods, Mac is looking forward to cooking food for Shabbats and events held at Hillel.