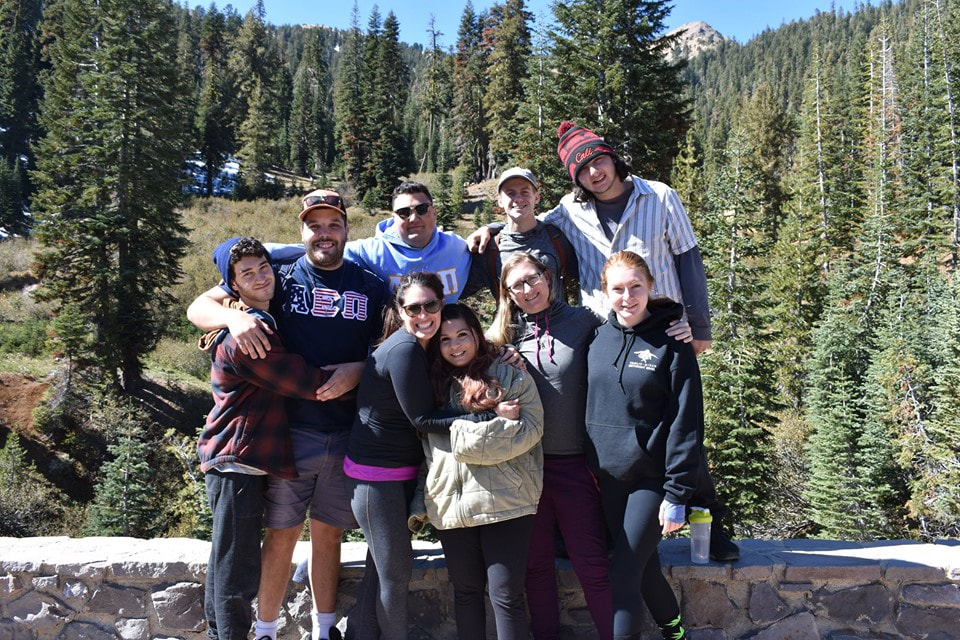 Yuval is a senior at Chico State, majoring in psychology and child development, with a focus on childhood education. In his free time, he likes hiking in forests, swimming, listening to music, watching movies, and hanging out with his friends. Originally from Israel, he moved with his family to southern California for a large part of his life. After completing a mandatory service in the Israeli Navy,

​Yuval moved back to Los Angeles to study at Santa Monica College, during which he earned an Associate’s degree and transferred to Chico State in the fall 2018 semester. Yuval moved to Chico to escape the “big city”, and he loves Chico’s nature and “small, college town vibe”. Yuval has experienced a bit of both worlds, living in Israel and the United States; he feels he can be of service to the small Jewish community in Chico as a team leader, and wants to bring as many Jewish students to Hillel. Yuval is also the head of the Jewish identity committee in Alpha Epsilon Pi. ​​​
Jacob(Jake) is a Sophomore at Chico State who is studying Biochemistry. He loves meeting new people and making a lot of new friends, if he is not in Hillel you can find him behind the computer either studying for his upcoming math or chemistry test. If he is not stressing about those you can find him tinkering or playing almost any kind of video game. If Jake is not playing video games you can probably catch him hanging out with the Brothers of the Alpha Epsilon Pi fraternity which he is a proud member of.

​He is from San Jose so moving up to Chico showed him that there is a slower pace and more people centric atmosphere. He loves Chico for the people he meets and all of the interesting people who come together in this lovely small little town.
​Nathan Sutton is a sophomore at Chico State that is studying Chemistry. He loves exercising, whether he’s at the Wrec Center or tossing a frisbee with his friends. He loves going on walks and he’s a bit of a comic nerd. When he’s not studying or exercising he’s probably spending quality time with his brothers in the International Jewish Fraternity, known as Alpha Epsilon Pi. Nathan is now the VP of AEPi for the year 2020 overseeing events and reporting to his President.

​He loves Chico because it’s a place where people are social and friendly. He’s especially excited to be an intern at Hillel so he can help the Freshman and new Hillel students get involved in interesting programs and activities.
Madeline is our VP of Wellness at Chico Hillel. She is a senior who plays women’s rugby at Chico State and loves to read, paint, and be outdoors. Her parents both graduated from Chico State, and now she is carrying on the legacy!

She loves Chico Hillel because of the friend group she has been exposed to while working with us and the support she receives from her team. She is excited to be a part of Hillel for her final senior semester and focusing on wellness. Madeline plans to continue her education and has been applying to graduate schools to become a counselor.
Andrea is a senior at Chico State, majoring in psychology. In her free time, she likes to read books, make ceramics, work out, listen to music and watch movies (especially horror films). She is originally from El Sereno Los Angeles, CA. She moved out of her parents home when she turned 18 and got her first apartment in Chico, CA as a freshman.
​
Growing up in Los Angeles she never really got to the beauty that nature had to offer. She loves the outdoors especially Chico’s night sky. It still brings a smile to her face everytime she looks up. She admires the star-lit sky and could stare at it for hours often getting herself  ‘lost in space.’ Hillel feels like home to her, the people she’s met through our organization are “All so accepting and sweet I love coming in on my free-time even just to hang out!” - Andrea.
Avery is a senior at Chico State, majoring in Multicultural and Gender Studies, with an option in Women’s Studies. She is a member of the Chico State Women’s Rugby team and when she isn’t at practice or in school she enjoys cooking and baking, as well as painting and exploring outside. Originally from San Luis Obispo (the happiest town in America!), she has been in Chico for five years and enjoys spending time in upper Bidwell Park and frequenting local restaurants.

As VP of Inclusivity, Avery is excited to join the Hillel team and continue to implement a diverse and inclusive space, where all students feel welcome and free to express their truest selves. If you see her around the office, feel free to say hello and have a conversation about ways we can continue to make Hillel a welcoming and warm community!
Ilana is currently a junior studying Musical Theatre at Chico State University. Her favorite Broadway musical is Les Miserables. She loves singing, dancing, and reading plays. When she is not in the Performing Arts Center, she is drinking coffee, updating her blog, or eating. Her videogame of choice is Smash brothers, and her favorite characters are the Ice Climbers, Sonic, and Kirby.

Ilana’s favorite outdoors place in Chico is One Mile and Upper Bidwell park, where she enjoys walking, climbing trees, and penny boarding.
Mac is a sophomore at Chico State, majoring in visual arts.  He is a volunteered manager of the Chico State division two basketball team and a brother of the Alpha Epsilon Pi Fraternity on campus.  Originally from Los Angeles CA, he has been in Chico for two years. When he is not busy with school or his extracurriculars Mac loves to cook, play/watch basketball, and participating in AEPi events. As VP of Nutrition and Cultural Foods, Mac is looking forward to cooking food for Shabbats and events held at Hillel.
Katie is a senior at CSU Chico. Katie is from Walnut Creek,CA. She spends most of her time studying, cooking, hiking and hanging out on the porch with the AEPi Brothers.

Katie is looking forward to sharing cultural food experiences with her team. She is currently exploring different avenues of how to utilize her degree in Nutrition Food Sciences.
​Zras is an MBA student at Chico state focusing on EIS (Enterprise Information System). He grew up with a strong work ethic from his family’s devoted businesses in Libya. He recently moved to the US and quickly learned fluent English in a short time! Since living in Chico, he enjoys being surrounded by nature and new adventures.

Zras joined Hillel because he wants to gain a real-world experience that enables to put everything he has learned into action as well as gain skills that can be applied to future jobs.